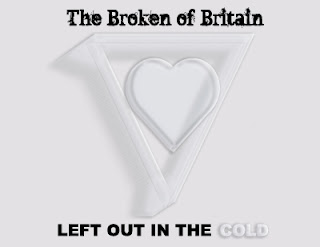 Brief on the Government’s response to the DLA reform consultation
The consultation submissions were badly analysed and presented, with many key arguments seemingly ignored in favour of those supporting the Government’s desired outcome.
The Broken of Britain, 5th April 2011
PDF version accessible via Google Docs here
1 The Broken of Britain, Demolition of the case for reform, 09 January 2011
2 Left Foot Forward, The ‘inexplicable’ rise in Disability Living Allowance explained,
14 February 2011
3 Consultation response by the Disability Benefits Consortium, January 2011, p8
4 The Broken of Britain, Submission to the Consultation on DLA reform: PIP Goes The Weasel,
10 February 2011
Posted by Iconic Imagery at 21:27

I made some of the same points, and some others, in my email to my own MP about this. While I don't think it would be fair to share the whole email, I might be able, if you're interested, to extract key points separately.

The whole consultation was a sham a farce and a lie. They had planned what they were going to do beforehand and they just did it and f&*^%& the disabled people.

DLA works - It is one of the few benefits that does.